The Four Most Common Causes of On-The-Job Electrocution 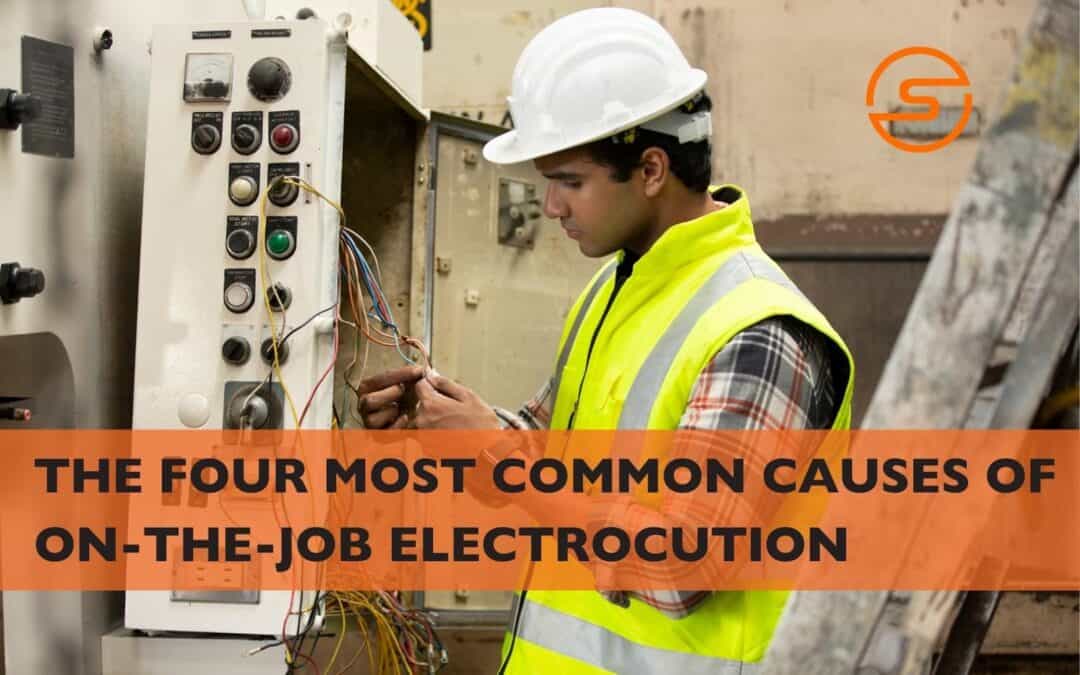 According to recent research published by the National Institute of Health, there are nearly 1,000 fatal injuries every year in the United States caused by electrocution, and another 30,000 non-fatal incidents. Roughly 5% of all burn injury patients admitted to the nation’s hospitals are caused by electrical injuries, and electrocution is the fourth most common cause of occupation-related deaths. Clearly, working with and around electrical lines presents a very serious risk of death or injury.

At Safeguard Equipment, we believe that risk is unacceptably high, particularly when you realize that most of these injuries are accidental and preventable. We have expended a lot of thought, effort, time, and research into inventing our COMPASS personal voltage detector (PVD) precisely to prevent electric shock injuries.

Electrical dangers are a silent threat: unseen, unfelt, and unheard. The purpose of the COMPASS PVD is to give individuals a “sixth sense” that detects both voltage and current, notifying the wearer of the presence of an energized line in the vicinity so he or she can avoid danger and stay safe.

In conjunction with adherence to safety protocols, the COMPASS PVD can be a critical tool in preventing electrocution on the job keeping you and your crew safe at all times, regardless of the conditions on the job site. The COMPASS PVD can help workers avoid these four most common scenarios that result in electrical deaths and injuries.

The COMPASS PVD can detect energized high-voltage power lines from a variety of distances with seven different sensitivity levels. Workers can set a distance range before the device emits a warning signal. While many utility workers may have to work around energized lines, the COMPASS PVD can provide a heightened level of awareness by using the device’s Smart Adaptive mode, which only alerts the worker when they move in closer proximity to the energized line.

Not only does the COMPASS indicate that an energized line is nearby, but it also provides directional indicators to aid workers in knowing where to steer clear. In emergency situations where there are downed lines from either a storm or an accident, the COMPASS PVD can provide much-needed situational awareness to help workers identify where energized lines have fallen when visibility may be low and conditions chaotic.

One of the most important safety measures for working with electricity is to shut off power – for individual breakers, master switches, or even whole systems – before working on powered equipment. If this step is overlooked or done incorrectly, or if a line is re-energized before work is complete, electrocution and electric shock accidents will follow. Failing to properly de-energize a line is the second most common cause of occupational electrocution deaths.

While it would be nice to rely on the principle that electrical safety procedures are meticulously followed at all times, all it takes is one mistake to lead to catastrophic results. Why take the chance? When an entire crew is equipped with the COMPASS PVD, workers will know with certainty whether a line is live or not, without having their safety rest on the hope that procedures were properly followed.

Even if no mistakes are made in de-energizing procedures, electrocution accidents can happen when the de-energized line is not correctly labeled or identified. When someone shuts off a breaker that is misidentified, that worker can make the assumption that the line that is being worked on is properly de-energized. But if the breaker was not identified correctly, that worker may be walking into a disaster.

The COMPASS PVD does not get confused or led astray by mislabeling; its job is simple: identify energized lines. When its signal goes off, a worker knows that a line is unsafe, period. What is more, that worker knows there is an error in identification so that it can be addressed right away to avoid future problems.

The fourth most common cause of on-the-job electrocution is contact with buried lines. The COMPASS PVD has a distinct advantage in this arena. The COMPASS PVD not only detects voltage but can detect current running through a line, even if that line is buried underground.

While most people know they should find out where power lines are buried before beginning any type of project that involves digging, accidents still happen, and they can certainly happen if underground lines have not been accurately located or if any lines are missed. While no device can detect current if it is shrouded by metal or by too much earth, the current detection capability of the COMPASS PVD can minimize these types of problems by alerting workers when it detects an electrical current where no lines were identified.

The Benefits of Using a Personal Voltage Detector

The COMPASS PVD can help you avoid and prevent all four of these common causes of electrocution. These life-saving devices are simple to use and simple to wear: they clip onto a standard hard-hat, giving you hands-free help that stays within eyeshot and earshot but out of your way. In addition to seven different sensitivity settings, the device has color-coded warning lights and an audible signal with a 360-degree detection range and directional indicators, showing whether and where it detects voltage or current. It will work in all weather conditions, and it is designed to be robust and reliable, able to be recharged in 90 minutes, and ready to go for up to 80 hours of use.

Don’t let your crew risk electrocution or other electrical injuries when there is a simple way to prevent them. Contact us today at Safeguard to learn more about our COMPASS and COMPASS LV products, or to request a demonstration. When safety is paramount, the COMPASS PVD is the device you need.